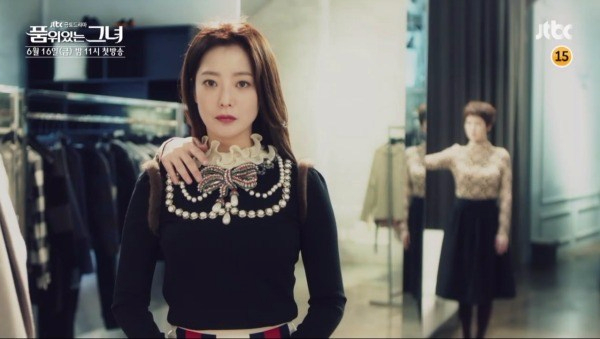 Recently there is a new JTBC Korean drama that caught my eye, which is none other than Woman of Dignity starring Kim Hee-Seon and Kim Sun-A.

I only started watching after reading about its phenomenal ratings in the news reports, and I got hooked just within the first ten minutes of the show.

This story revolves around the lives of two women, namely Woo-A-Jin acted by Kim Hee-Seon and  Park Bok Ja acted by Kim Sun-A. It showed how one’s life goes from the bottom to the top, while the other falls from grace. 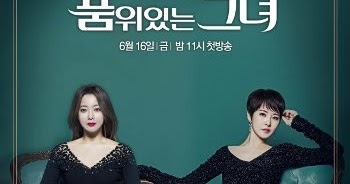 This is a story that is centred on a rich but rather dysfunctional family. Basically Woo-A Jin is a dutiful daughter-in-law of the rich family who leads a luxurious life, however her life slowly came to shatters following the arrival of the new caretaker whom she employed to take care of the ailing father-in-law. The new caretaker Park Bok-Ja deliberately seduced the father-in-law and soon lay claim to her new status as his wife much to the disbelief of the rest of the disapproving family members.

Great start to drama with a hook

I really like intense fast-paced dramas with scheming women and this drama totally fitted the bill. I’ve got to say that this drama has a rather special vibe as it is sorta quirky, at times funny, yet with a sinister undertone.

There is always this sense of mystery and creepiness, probably because it started by revealing the morbid ending, which showed a luxuriously dressed Park Bok-Ja lying in a pool of blood.  The drama than went into flashback mode that slowly depicted how Park Bok-Ja went from being a caretaker that purposely entered a family to seduce the father for money ended up being murdered. Because all the family members have issues and were really against the manipulative caretaker, all of them could very well be the murderer so the show really keeps the viewer guessing as to who is the one who really did it.

Kim Sun-A was extremely good in her portrayal of this cold-blooded and two-faced caretaker who bluffed her way into a rich family and succeeded in securing the heart of the father-in-law by pretending to be innocent and sweet. Seeing her manipulate the  feelings of all the family members was exasperating yet strangely addictive to viewers. In a way you feel sorry for the father-in-law who whole-heartedly believes in her, yet you can’t help but want to see just how bad she can become and how much of a disaster she can bring to the rich pampered family.

Woo A Jin was the embodiment of female empowerment

Meanwhile, Woo A Jin was just as good as Park Bok-Ja was bad. She might be the rich daughter-in-law in the top level of society, but she certainly has a kind heart. Because of her goodness, it was hard for her to see how manipulative Park Bok-Ja was until it was too late to rectify the problem.

In face of a new enemy married into the household, and a husband who cheated on her with a woman whom she was nice to, her seemingly perfect life was ruined. It is refreshing to see how a rich and pampered woman stayed strong and went about righting the wrongs in her life such as putting the cheating husband and the adulteress back in their place and steering Park Bok-Ja into the right path.

With only 4 episodes left to go, there are still many questions left unanswered. Why is it that Park Bok-Ja is so adamant about marrying into this family? What secrets are she keeping? Did Park Bok-Ja know Woo A-Jin previously? Who exactly killed Park Bok-Ja?Are there any twists awaiting us?

I am eager to find out all the answers, and I truly hope that the scriptwriter and director won’t disappoint us, not when the drama has been going so well so far!

Have finished the entire series and I have to say this drama does not disappoint. And kudos to Kim Sun-A, who made me really sympathise with her when she displayed her emptiness after attaining her wealth. During the end of the drama, she was trying to make amends and trying to be a better person, but alas first impressions last, and the numerous mistakes she made in the past has cemented her reputation as the “evil woman”, hence she is destined not to be forgiven.

As for the person who killed her, there was a bit of a twist, but frankly speaking I found the reveal of the identity of the killer underwhelming. I guess such a twist makes it more interesting? But I thought it is a bit illogical and does not tie in that well to the earlier parts of the show. Spoiler ahead.

I think it will make more sense if Park Joo-Mi’s son had appeared to be more deranged or emotional previously, so that I can better tie in his persona with someone who can kill.

Oh well, but all in all, I really enjoyed the show. It has this rather quirky dark mysterious vibe that pulls you into the show.

If you enjoy Woman of Dignity, there is a high chance that you will enjoy Misty too. Read the review here.

Parasite – The Korean Movie that everyone is now discussing