Wow, what a drama. What a mindblowing, suspense-filled, intense drama that had me hooked from Episode 1.

Misty reminds me of another JTBC’s drama Woman of Dignity, especially since both dramas started hooking viewers in with the mystery surrounding a murder and complex characters who may or may not be bad. It also kind of reminds me of book author Liane Moriarty’s Big Little Lies (a nice book btw!)  as Misty is about the pretences that one upkeeps beneath the seemingly perfect facade of marriage, but laced with guilty secrets and a dark past that one strives to keep hidden.

In short, the story follows a successful news anchor who got charged with murder of her ex lover, and requires the help of her estranged husband as a lawyer to help her win the case.

There is a mix of newsroom politics, crime, illicit affairs, dark past, schemes, secrets, revenge and passion. All ingredients that I like in my drama!

Gotta say that JTBC did a good job in casting the veterans for the male and female lead, Ji Jin Hee and Kim Nam Joo. Kim Nam Joo was absolutely captivating in her portrayal of this shrewd, aloof, ambitious, beautiful news anchor who is unapologetically hungry for success, even if it means offending or stepping on others. But this seemingly perfect life got shattered apart when she fell from grace and became a suspect for her former lover’s murder. 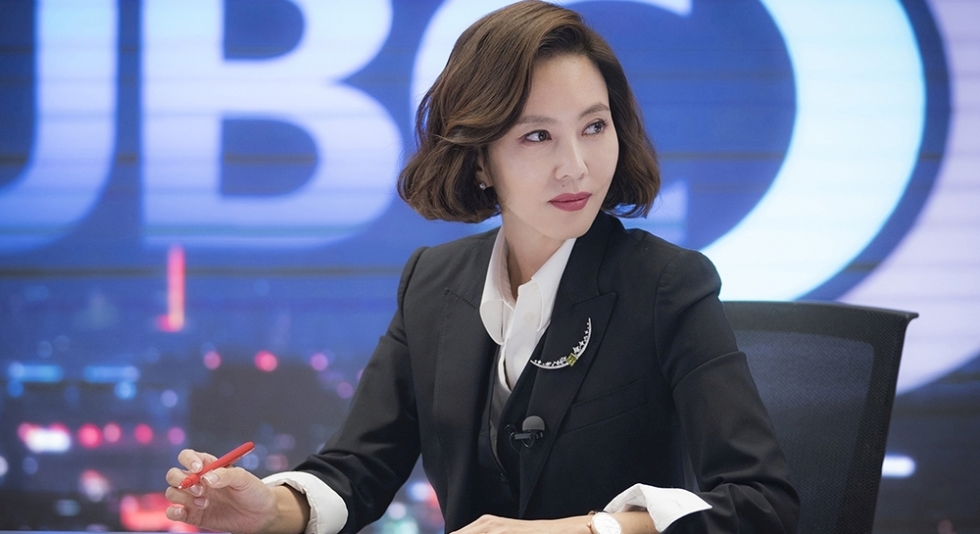 After 8 episodes in, I’m still not quite sure how to describe her character. There are still so many shades of grey about her personality. Is she manipulative? Does she love her husband? Or is she simply manipulating his feelings to get what she wants? Does she truly believe in delivering news impartially, is it just part of her facade as a news anchor or does she have some other end goal in mind that is not revealed yet? Why is she so so hungry for success? There’s definitely some juicy dark past that is not revealed yet, and I am just eager to know more about it.

Kim Nam Joo is bewitching is her portrayal of this character. I don’t think Go Hye Ran is a likeable character, yet I can’t dislike her. Cos she is just so ballsy, so upfront about being power-hungry and indeed very capable.

Ji Jin Hee is acting as the quietly-suffering lawyer/ex-prosecutor husband who loves his imperfect wife and is willing to stand by her through thick and thin, even if he thinks his wife does not love him. Morally upright, he is in a sort of one-sided love with his wife, yet willing to make use of his connections to help his wife in her rise to power even if such political games go against his principles.

I think he is doing a good job in his acting as well, just that unfortunately it sort of pales in comparison to Kim Nam Joo, but this is because Go Hye Ran is simply such a complex yet in-your-face character that simply mesmerises the screen when she appears.

So Who Killed Kevin Lee?

The drama first started with steamy kissing scenes between Go Hye Ran and former lover Kevin Lee, followed by their accidental meet-up, when Go Hye Ran realised that this celebrated award-winning golf player Kevin Lee who is now married to her high school best friend was her former lover whom she dumped harshly because she deemed him too much of a loser without much prospects back then.

Hell hath no fury like a lover scorned and Kevin Lee, in his present day popularity, is determined to create chaos in Go Hye-Ran’s current seemingly perfect life.

One day Kevin Lee is found dead. So who is the prime suspect? We as viewers know that actually Go Hye Ran is innocent. But who else can it be? Could it be her high school best friend, and current Kevin Lee’s wife Seo Eun Joo who discovered their illicit relationship from the kiss she witnessed in the car’s camera and is determined to exact revenge on her friend for betraying her?

Could it be her supposedly morally upright husband who also discovered Go Hye Ran secretly meeting Kevin Lee, and having heard Kevin Lee allude in his face that he and his wife has something illicit going on?

Could it be the bitchy new news anchor who has been coveting Go Hye Ran’s anchor position and has much to gain from Go Hye Ran’s final fall from grace?

Or could it be the young male reporter Kwak Ki Sook who has always looked up to Go Hye Ran and once saw Kevin Lee “threatening” Go Hye Ran?

I’m very sure that there will definitely be some twist in store, and judging from the twist in Woman of Dignity, I am inclined to believe that the real murderer might be the young male reporter, as he seems like the least likely candidate as of now. If it is Kevin’s wife who was the actual murderer, it seems a bit too obvious.