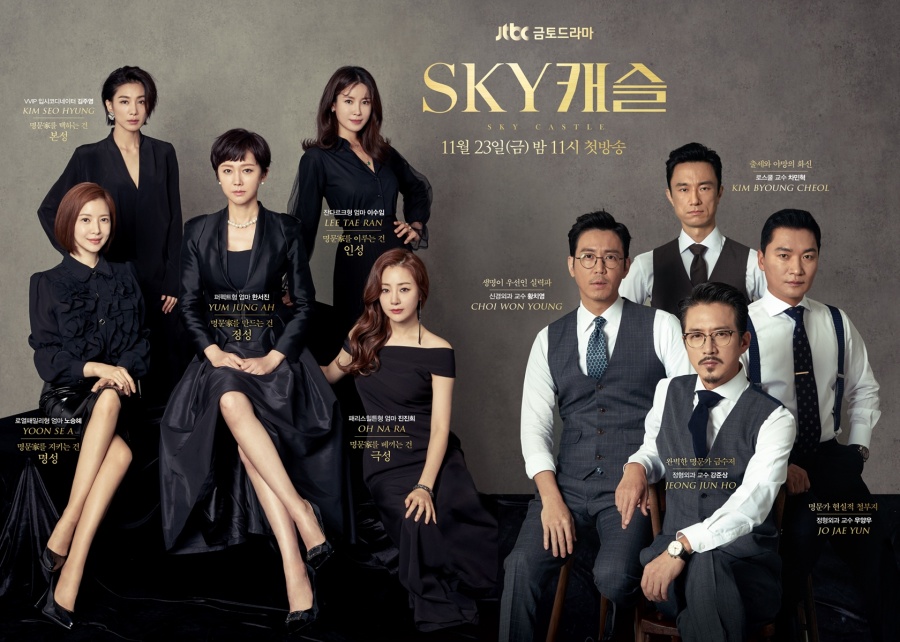 JTBC is really maintaining its standard with one good quality drama after another, and their dramas really suit my taste. Just watched the first episode of Sky Castle and I have to say, I am keen in watching on, in spite of its lack of A-list cast.

Sky Castle is a satirical comedy about 4 groups of elite families who stay in an upperclass castle called “Sky Castle” , with the main plot focused on the efforts of the couples in climbing to the top within this upper class echelon beneath the surface of cordial relationships.

The story revolves around the rich wives pitting themselves against one and another in the race for their life to appear more perfect, with perfect being defined as having the husband successful and children smart.

The friendships among these 4 wives remind me of the relationships among the rich friends in Woman of Dignity (which is also a drama by JTBC), with seemingly close ties but you never know what secrets each is hiding from the other.

At the same time, this drama also has similar vibe to the setting and premise in Liane Moriarty’s books like Big Little Lies or Truly Madly Guilty.

A drama centred on women and their power struggles

In the first episode, it showed one of the wives’ son getting admitted into the top medical university in the USA, and how the other wives tried to curry favour with her so that they can get tips from her on how to nurture their children and get their hands on the “secret” to getting their children admitted into such universities as well.

Such topic is seemingly mundane however the treatment of the drama is not boring and we as the viewers can feel the undercurrent of tension and bitchiness amongst the wives. Their antics kept me entertained enough to watch on and eager to know which wife is gonna emerge the winner.

A suicide in the first episode – what is wrong with the seemingly perfect life?

One of the mothers whose son just got admitted to the prestigious medical university and is the envy of all mothers committed suicide by shooting herself.

What went wrong? What made her so sad that she needs to kill herself when she is leading the dream life on the surface?

In spite of the light-hearted note of this drama, it ended with a suicide that hints at the dark side of each wives. I love stories with a dark side and it definitely intrigues me.