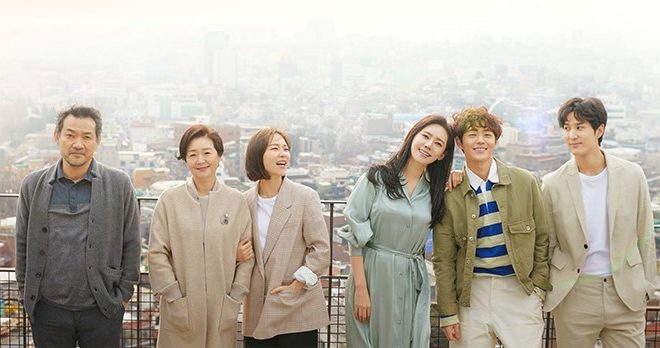 Much to my surprise, Korean drama My Unfamiliar Family is slowly growing on me, though I was originally dismissive of this title which appeared to be a slow-paced slice-of-life type of drama that doesn’t usually appeal to me. And frankly, a family-based drama just sounds so boring to me initially!

Starring Han Yeri (finally knew who she is after I watched Six Flying Dragons) and Kim ji Suk, this is a drama that deals with the intricate relationships among family members, people who are supposed to be each other’s closest kin, but whom are unfamiliar with each other. To me this is a rather interesting concept that is a reflection of reality.

Sometimes you see people around you who are so jovial outside with friends, you would never have guessed that they are in actual fact really reticent at home with their family members.

The key reason for this drama’s good watch is the really great acting and writing of the characters that really captures the nuances and delicate relationships between family members and friends. When watching, i feel that these characters could easily be people around me in real life.

We have the middle aged parents who have grown sick and dismissive of each other, where impatience and hurt all through the years slowly wear down the once loving relationship.

We have the impetuous middle daughter Kim Eun Hee (acted by Han Ye Ri) who cannot quite control her emotions and have a tendency to be eager-to-please when it comes to handling boyfriends.

We have the aloof older sister Kim Eun Joo (acted by Choo Ja Hyun) who is stoic and harsh. And then the maknae brother Kim Ji Woo (acted by Shin Jae Ha) who appears carefree and happy-go-lucky to survive in this dynamic family.

An interesting addition to this family is Park Chan Hyeok (acted by Kim Ji Suk) who is basically the best friend of Eun Hee, and the boss of Ji Woo, who although is not technically a family member, yet understands the family more than the family members themselves do.

For me personally, I really enjoyed the very realistic portrayal of the ambiguous relationship between supposed good friends Eun Hee and Chan Hyeok.

The suppression of true feelings behind the guise of friendship, the occasional sharing of real feelings through ‘jokes’ to test reactions, such a delicate relationship was portrayed really well by our 2 leads and extremely realistically and subtly done.

I also like how the script tried to give Eun Hee’s character some growth by showing her finally admitting to herself her feelings for Chan Hyeok, whom she has loved since university, but never dared to admit even to herself as she suffers from self-esteem issues in spite of her confident and goofy exterior,

I really root for these 2 leads, although their wasting of time and inability to progress beyond friends due to their own lack of courage can be really exasperating to watch at times!

Even though I generally dislike slice-of-lives or the slower paced type of dramas, I surprisingly managed to watch on till the final episode.

Some articles have branded “My UnFamiliar Family” as a family-version of The World of The Married. I frankly think such an analogy is way too dramatic and not really accurate. Like The World of The Married, My Unfamiliar Family has a few “shocks” in store, like how the elder sis’ husband turned out to be someone different from what everyone thought, when the old husband suffered from some concussion and lost his memories etc. However the entire treatment is just so different.

My Unfamiliar Family may have some “conflicts” and dramatic arcs in the story, however the treatment is not at all dramatic , but more realistic and slow-paced.

You really need to have some patience to get to know the family members well, before slowly accepting their idiosyncrasies and possibly falling for the charm of this drama.