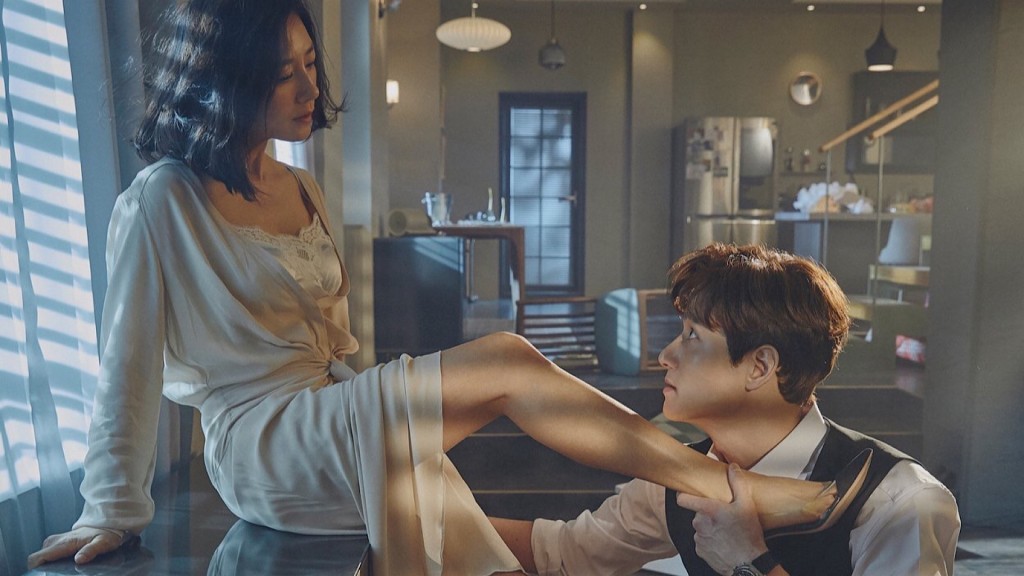 After all the twists and turns, The World of The Married finally came to an end. Some netizens felt that it was open-ended and disliked it, but I chose to see it as Joon Young coming back home and the drama ending on a positive note.

When Ji Sun Woo (acted by Kim Hee Ae) started out as a victim betrayed by her husband and friends, I really sympathised with her and rooted for her to get her revenge on the cheating husband Lee Tae Oh, the smug third party Da Kyung and those fake friends who chose to hide the fact that her husband was cheating on her.

However in the second half of the story, I started to get quite tired of Ji Sun Woo and started to see her also as an inept mother who chose to keep focusing on her hurt and desire to win Lee Tae Oh instead of resolutely cutting ties off with that nutcase and his equally hateful new wife Da Kyung to focus on bringing up her child Joon Young.

Ji Sun Woo Seems to Have Won On Surface

In episode 16, it appears that everything is finally falling into place for Ji Sun Woo. Joon Young is no longer angry with her, wanted to come back to school in Go San, and Sun Woo also managed to get her job back.

She even succeeded in proving to Da Kyung that she was just a substitute for her when she won Lee Tae Oh’s heart, dealing a fatal blow to Da Kyung that led her to drop Tae Oh and moved out of Go San with her entire hateful family, rendering Tae Oh alone with no wife, no kid, no money and no career.

It seemed like a befitting end for Tae Oh to lose everything that he used to rub Sun Woo’s face in and it is also a big blow to Da Kyung who was once so smug about snatching the prized Tae Oh from Sun Woo.

Personal Opinion: Ji Sun Woo Not As Innocent and Wronged As She Appeared

However I actually don’t quite agree with Sun Woo’s actions in driving Da Kyung and Tae Oh away because in my opinion she should just stay low and live a good life with Joon Young, away from toxic influences like Da Kyung and Tae Oh, and that network of gossipy self-entitled rich ladies who rule Go San.

Sometimes to people who just prove time and time again to be nuisances, it is better to just not respond anymore to them and drop thoughts of exacting revenge, because even waging revenge saps one of energy and some people are just not worth it. At that point in time, after her son has displayed signs of psychological trauma from his parents’ never-ending conflicts with each other, her son’s well-being should just be her priority.

Yet, Sun Woo responded to Da Kyung’s call and even met her to try to prove to her how she was making a mistake by staying on with Tae Oh. I can’t quite tell if it was her plan to upset Da Kyung to get a divorce to exact revenge on Tae Oh, or was she genuinely concerned for Da Kyung from a woman-to-woman point of view. But to me, this is completely unnecessary.

If her intention was to get revenge, i think letting Da Kyung get stuck with an untrustworthy husband like Tae Oh while constantly feeling insecure should be the best revenge for she would essentially be wasting her youth away on a trashy guy. Also, Da Kyung already said that if Sun Woo can promise not to contact Tae Oh, she would also get Tae Oh to stop contacting Joon Young.

Isn’t this actually a great deal for Sun Woo? It would just resolve all problems, so I don’t know why Sun Woo does not want to take her up on the offer (since it is win-win for both, with interests aligned) but chose to be a busybody to go one step further by making Da Kyung leave Tae Oh instead.

I truly feel that Sun Woo has a problem of getting overly extreme and going too far. She doesn’t know when to just stop and accept that not responding may be the best response. Sometimes a problem is just 10% serious, but she uses a method of 100% magnitude to resolve it, which causes even more troublesome consequences after that.

By forcing Da Kyung to divorce Tae Oh, Tae Oh ends up losing everything and getting unhinged and dangerous. Which once again will have an impact on Sun Woo and Joon Young.

So naturally Tae Oh is in despair when he loses his house, his wife, his child. And then he sees Sun Woo there in her car witnessing his despair and got furious. So once again, I’m wondering why must she appear there? Why can’t she just choose a quiet life and not bother about Tae Oh anymore? Why must she keep proving time and time again that she won the battle? This is why I am starting to lose patience with Sun Woo as I feel that there were times where she is not much better than Tae Oh though of course she was first the wronged party. She simply cannot let go of her hurt and must win.

So far Tae Oh has been proving himself to be some kind of bad luck omen where nothing goes right as long as he is involved. So if I am a mother whose son is experiencing psychological issues due to the father, i should just cut him off from my life. I don’t know why she must keep antagonising him. It’s been quite some time she got a divorce, just get over it and focus on what is truly most important.

After that Tae Oh went into depression mode and started stalking Sun Woo and even “kidnapped” Joon Young just to see his son. Actually at that point in time, Tae Oh really just appeared so destroyed and pathetic as he sniffles around his son who was scared to be around him, that I don’t even hate him anymore. It was in fact quite heartbreaking when we see Tae Oh breaking down in the middle of the meal with Joon Young and Sun Woo.

A drowning man would clutch any straw, and by then a desperate Tae Oh who now has nothing hopes to get back together with Sun Woo, and play happy family with her and Joon Young. Alas, too late, and it doesn’t help that Tae Oh still does not seem to comprehend that this happy family was destroyed by him in the first place, and he had inflicted too much pain on his ex-wife and son that it was too late for reconciliation.

We see Joon Young looking at his father in disgust and weeping in the bathroom. I feel for the poor boy. Why should he need to see his father behaving in such a pathetic way? Also, would his mum relent and gasp get back together with him?!

The last straw came when Joon Young and Sun Woo were about to leave Tae Oh, and Tae Oh suddenly went suicidal and stepped in front of a moving truck.

It was really shocking and also shows just how incredibly selfish Tae Oh is, as he just doesn’t care about how his actions would bring trauma and guilt to Sun Woo and Joon Young if he died just like that.

A scared Sun Woo ran towards Tae Oh who was thankfully unharmed, clutching at him while he cried in her arms.

Seeing this scene of his extreme parents who did not seem able to remove themselves from each other, Joon Young has had enough and ran away. It was only then that Sun Woo realised she had lost what was most important to her in her bid to win.

While this is indeed very heartbreaking for Sun Woo, I actually agree that Sun Woo deserves to have her son run away from her, before she can fully realise what she has done wrong and learn from her mistakes.

By the way, really want to give kudos to the child actor who acted as Joon Young. He really emotes the complicated feelings of Joon Young really well.

Open Ended Ending: What Do You Think?

Thankfully, the final scene shows someone coming back home and Sun Woo welcoming back this person with open arms. I choose to see it as her runaway son finally coming back home, and not a figment of imagination as some netizens have suggested. As such, it was a good ending for me.

How about you? What is your interpretation of the ending and how did you like The World of The Married?