It’s 2018 now and I think is a befitting time to reminisce on the top dramas that I enjoyed binge-watching over the past 2017.

Watched Defendant without really high expectations and was actually mildly bored in the first half of the first episode when it was setting up the background of the story.

Yet once all the main triggers were set, the drama was seriously on a roll. Mystery and injustice were elements at the core of the drama, when we followed the main lead Park Jung-Woo (acted by Ji-sung) roller-coaster journey of discovering what truly happened on that fateful night where he was found to have ‘killed’ his wife but with no memory of how it took place.

Locked in prison and battling against time and an all-powerful nemesis, it was a truly adrenaline-filled ride as we joined him in his defence against injustice and his search for truth to come to light.

I’ve been a bit addicted to thrillers ever since I started on Signal, and was led to watch Voice after seeing netizens’ favourable comments about Voice and it is indeed a great watch!

A policewoman Kang Kwon-joo (Lee Ha-na)  working in a call help centre with an uncanny ability to hear the smallest of sounds, she made the best use of her hearing ability to chase down criminals with the angsty mad-dog detective Moo Jin-hyuk (Jang-Hyuk) . And in the search for criminals, they finally discovered the elusive criminal who murdered their loved ones. 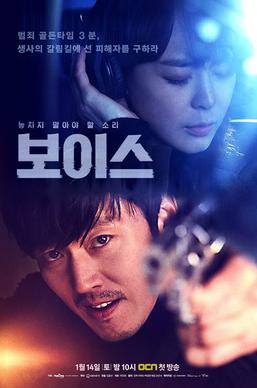 Voice sounded quite like a typical criminal drama with the exception of the superpower hearing element of the female lead, yet the pacing was fast, plotline intelligent and antagonist scary enough.

All in all, a great drama that made you glued to the screen throughout even while your heart hammers against your chest in half-dread and half-anticipation of what comes next.

3.) Rebel: Thief who stole the People

A story about the famous Hong Gil-dong, the thief who stole from the rich to distribute to the poor, a period drama about him is nothing new to Korean audiences as there had been various adaptions over the past years.

But this adaptation has Amogae, the father of Hong Gil-dong who is a slave and tried to break out of being a slave so as to give his children a better life. And this Amogae who is acted by the amazing and charismatic Kim Sang-Joon made the first half of the drama addictive. I was just so reeled in by his portrayal of this character.

Basically Kim Sang-Joon carried the whole show in the first half of the show. He was plain mesmerising in his performance. And I think he fully deserved all the acting awards he received for this role.

It helped that this drama has a very coherent plotline, pacing is reasonably fast, and amazingly all actors in this drama portrayed their roles decently. Some exceptional, some good, some average, But all in all decent. There was no one dragging the show down. And there was good characterisation for all characters. There was the robin-hood inspirational aspect as well as the brotherhood element when Hong Gil-dong and his gang of brothers worked together to correct the social injustices by stealing from the rich. It was at times thought-provoking as we take a glimpse at the mentality of the rich in which they truly believe that a noble will always be a noble, and that a slave can forget about having their own opinions of being daring to provoke or rebel against the master. Of course, there is also the love line, but it wasn’t drawn out, but kept rather realistic and sweet.

Go Back Couple wasn’t a commercial success with rather lacklustre ratings in Korea and not much hype about it. I have yet to finish this drama, but its poignant, at times funny, and bittersweet story definitely left an impression on me and makes it one of the top K-dramas I have watched in 2017.

Acted by the super cute and youthful looking Jang Nara and Son Ho-Jun, this is a drama about a married couple jaded from the brutal realities of life after valiantly making ends meet in a much-hated job to support the family, encountering daily friction as what many married couples do, and being caught up in the wistful regret of what could have been if they did not marry.

Go-Back Couple details what happens when one day after divorce, the couple woke up and found themselves back in their youthful selves in school before they started dating.

What was surprising to me about this drama was its unexpected mix of realism, comedic elements,  bittersweetness and poignancy. I could be laughing one minute and suddenly crying the next minute. I like this poignant drama that really pulls at your heartstrings and I believe viewers watching this drama will also inevitably ask themselves this:

“If you have a chance to go back in time and redo your life, will you still want to be together with your current spouse? Will there be anything else that you will like to have done to your life differently?”