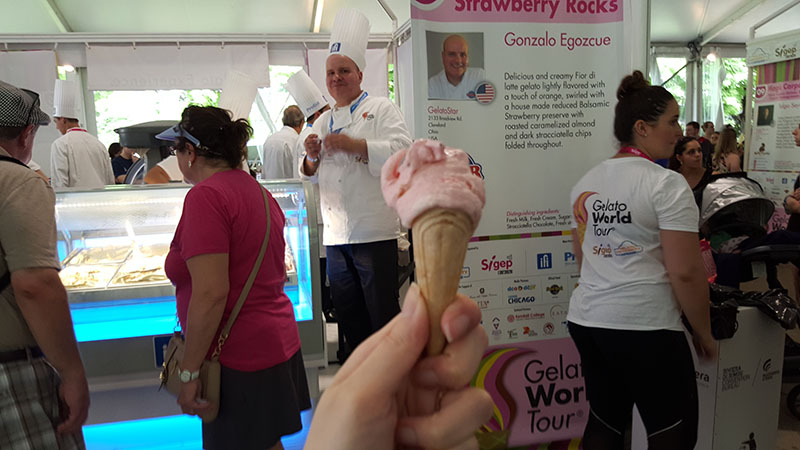 It is a travelling competition to determine the best gelato in the world and naturally I was very tempted to go and have a taste of how the best gelato taste like once I heard about it. My conclusion after tasting? I think I can’t tell the difference between quality gelato and normal gelato haha. 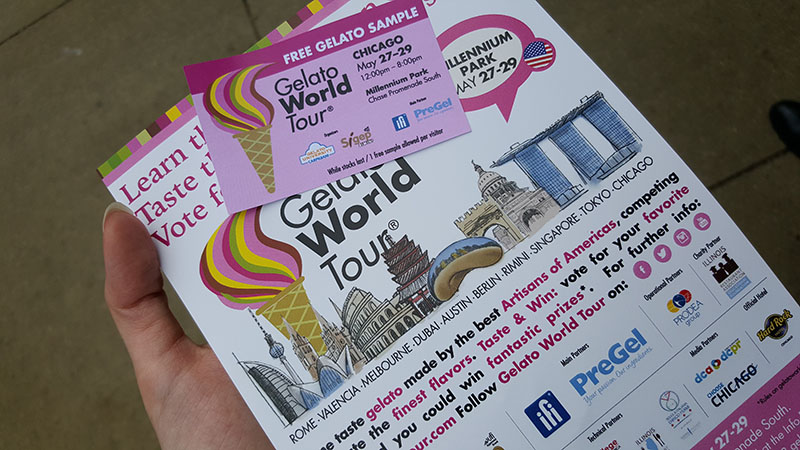 Many a time, I feel slightly underwhelmed by events held in Millennium Park because they often turn out to be less impressive than what it sounded like. But this time round, I feel that it is worthy of a visit because there are free workshops and free tastings. You could pay 10 dollars to get 8 sample tastings, but my 4 free sample tastings are good enough for me.

This was what I tried first. Passion Fruit Ricotta with Candied Walnuts by Florida’s gelato shop Dolci Peccati Gelato. I only tried it on a whim, but it was surprisingly yummy! It is a whole milk Ricotta Based Gelato swirled with a homemade tangy passion fruit marmalade. This surprising blend of flavours is topped off with small pieces of crunchy candied walnuts.  It tastes quite light and leaves you wanting more. 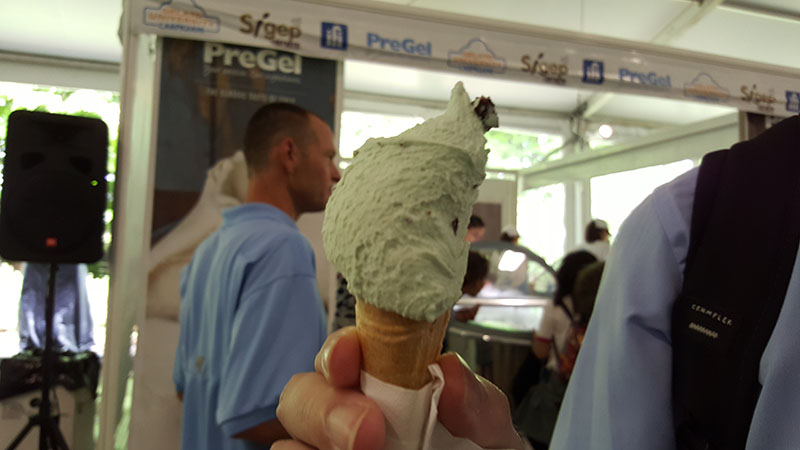 Next up, I had mint chocolate chip gelato.

Then I tried out balsamic strawberry flavoured gelato by GelatoStar based in Ohio. This is the description for the gelato: Delicious and creamy Fior di latte gelato lightly flavoured with a touch of orange, swirled with a house made reduced Balsamic Strawberry preserve with roasted caramelized almond and dark stracciatella chips folded throughout. I can’t really tell the difference from a normal strawberry flavoured gelato though haha. On a positive side, it is not sickly sweet and is quite refreshing.

And this is the most special gelato I tasted during the Gelato World Tour – Saffron Pistachio with Candied Lemon Peel Gelato by Dolci Gelati Café at Washington – District of Columbia.

According to the artisan Gianluigi Dellaccio, this flavour was originally created for the Persian palate but they added the candied lemon peel to infuse a unique texture and flavour into it. Actually I can’t quite appreciate it cos it somehow tasted more savoury than sweet to me. I don’t feel like I am eating gelato. I thought I tasted malt too. Maybe this is the so-called Persian flavour? Which I am unfortunately unaccustomed to.

Although all I got were samples, but the servings were pretty big for sample tastings, and I felt so full after all these “desserts”. And best of all, they come free:)