There is nothing I like more than a cute Jang Nara and hence The Last Empress is definitely a must-watch on my list.

Fast-paced, intriguing with a touch of sinister is my first impression from the first 2 eps and so far I am enjoying the drama and I hope it maintains its standard.

An Imperial Family in the Modern Day 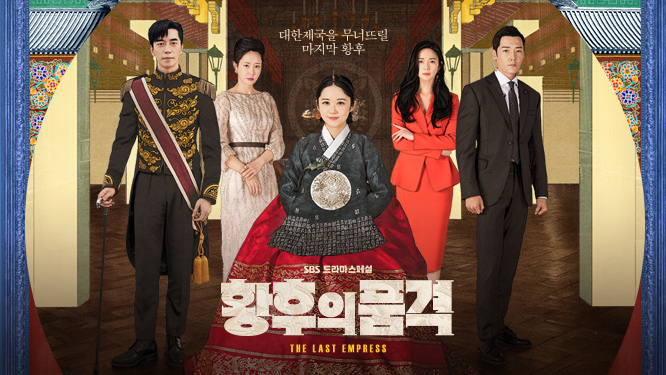 We are introduced to the Korean Imperial Family in the modern day, a monarchy seemingly well respected by citizens but in actual fact a dysfunctional family with hidden secrets.

The Emperor, acted by the forever-typecast-as-baddie Shin Sung Rok, appears gentlemanly and dignified but is explosive and crazy in real life.

His mother is an over-protective Empress Dowager who is secretly keeping his son under her surveillance.

Adding to the mix is the pretty but conniving Min Yoo Ra(acted by Elijah Lee), the personal assistant of the Emperor who has a boyfriend and a child, but is trying her best to shirk off her past as she tries her best to charm the Emperor to become his lover.

What secrets are the Imperial Family hiding?

The bright and naive Oh Sunny (Acted by the forever young Jang Nara) was invited for a luncheon with the Emperor with a few select civilians and during it, a terrible terrorist attack happened. A civilian took the emperor hostage and was interrogating the Emperor for what he did with his brother, a former bodyguard in the palace who went missing seven years ago.

Within the first episode, the premise was set with hints of an Imperial Family who are not who they appear, and I am intrigued with what exactly happened and I want to know more about just how evil this family really is underneath the dignified exterior.

Jang Nara in her element in a bright and sunny role

Jang Nara is acting as Sunny Oh, a bright and happy musical actress who highly admires the Emperor. She is in a element in this cutesy role which she usually does best and brings a brightness to this otherwise intense and dark family.

She will eventually get married to the Emperor and I am interested to see her bumbling about in this family where everything is not what it seems.

I can almost imagine her making faux pass while learning the rules of the Imperial Family and being clueless to the undercurrents of evilness lurking in the house already.

For some reason, this drama reminds me of Return which also stars Shin Sung Rok in a similar role-crazy explosive chaebol . I see similarities of crimes and secrets just like Return but I expect less intensity and more of cute and funny moments with Jang Nara in the mix, and also a romance line with Choi Ji Hyuk who has yet to appear.

All in all, the Last Empress fared well for its premiere and I definitely want to see more of it.