I have been a bit late in catching SBS’s Return, which enjoyed high ratings, and hype due to the sensational reports of Go Hyun Jung assaulting the director which resulted in her leaving the set and being replaced by another actress Park Jin-Hee halfway through the drama. Talk about drama within a drama.

Anyway, the story follows Choi Ja-Hye (acted by Go Hyun Jung and later Park Jin-Hee), a lawyer and Dokgo Young (acted by Lee Jin-Wook), a hot-tempered detective, and how they work together on a murder case where the suspects are children from the elite class.

The storyline sounds simple and focused enough; what makes it stand out is that the story revolves around the upper class society, namely a bunch of 4 friends with money and power who can manipulate information and hide truths with their money.

Yeom Mi Jung, acted by Han Eun Jung, is a mistress of one of the 4 friends, and one day ends up killed with her corpse in one of these friends’ car boot. So who did it?

The viewers were kept in the dark as to who exactly is the murderer. But we do know that all these friends’ words cannot be fully trusted, and all have their own skeletons in the closet. All we saw were these rich man’s son embarking on more and more ridiculous actions to cover up the truth.

Initially intriguing but loses steam as story plods on

The first few episodes were interesting and we were introduced to the different chaebols, each with their own weaknesses and ugliness in personality. You can’t help but want to know more about their sordid relationships ( they are ok with kissing each other’s partners?!) , and their strange closeness in friendships. Their lives are really intertwined with one another’s and they share a long and shared history, yet I don’t feel that they genuinely like each other.  Instead of saying they are close friends, I will say they are just friends due to circumstances and more like “partners in crime” with shared history. 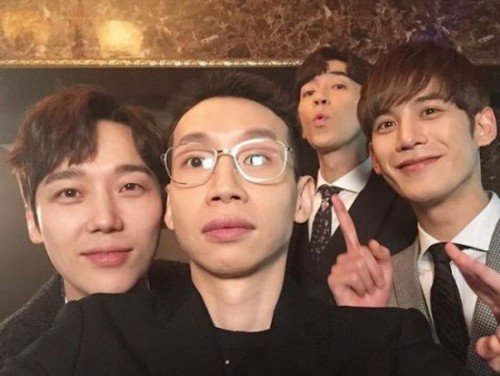 It was intriguing how they got themselves in a situation where they are stuck with a corpse (who exactly killed Yeom Mi-Jung?) and the lengths they go to try and shirk any form of connection to the corpse in case they are labelled as murderers.

Yet, in their bid to prevent being linked to a murder, they end up murdering.

Basically it is a case of the bad doing bad, and the good trying all they can to catch the bad people, yet the bad people are often one step faster.

Such a premise is ok, however after watching 10 episodes and still seeing the cops being sidelined by the bad people, it starts to get kind of annoying.

A Bit Too Over-The-Top and Repetitive

Also, it does not help that I start to find the story a bit too over-the-top.

If you say that they murder people accidentally to prevent being seen as murder suspects, it makes sense the first time, after all they are rich people with image to maintain. But if it keeps happening, like how whenever any problem crops up, and the first thing that Oh Tae Seok and Kim Haek Beom thinks of is killing them so as to cover their tracks, it gets quite ridiculous. And this happens quite frequently. At least for the first ten eps that I have watched. Killing without any thought of consequences and at such a frequent rate just doesn’t make much sense, especially for two chaebols with so much to lose.

So, the story sort of keeps going in a circle. After they made another bad action, they have to cover it up with more ridiculous actions.

Good Acting from the Villains

Even though it was Go Hyun Jung’s comeback drama, it actually wasn’t very obvious that she was the lead. And in fact I don’ think it required much acting skills for her character.

Rather it was the villains that stole the show.

Shin Sung Rok was great in his portrayal of Oh Tae Seok, the seemingly gentlemanly and cultured rich man with a cruel streak, and apparently no conscience to speak of.

Bong Tae Gyu was also fantastic in his portrayal of the sadistic Kim Hak Beom with serious anger management issues and who basically acts without thinking most of the time.

Even though it is quite jarring to have the lead actress who once appeared like a righteous lawyer suddenly become the villain in the drama, it at least finally gave the story a direction to move towards instead of veering around in circles.

I don’t think the plot changed because of the change in lead actress, I believe the writer already had this in mind when she first wrote the story, which is why there were a few sudden scenes in the beginning of Go Hyun Jung looking sad in front of the sea and dreaming of drowning in water.

It is just that it was quite a sudden change in direction in the middle, without enough hints in the beginning to suggest this direction the plot is moving towards that makes it a bit hard to accept initially.

Having said this, I personally actually prefer Park Jin Hee’s portrayal of the character. I think there was more definition to her character , it made me understand who Choi Ja Hye is. Whereas when Go Hyun Jung acted as the lawyer, all I saw was a lawyer who appeared righteous. In fact I couldn’t tell what personality the lawyer is supposed to have.

In spite of the high ratings, I’m actually having trouble following this drama and getting into it, as I feel bored and annoyed at times at the repetitive twists.

Anyone feeling the same way?